I must have met Charles Atlas fifteen years ago or so now, but odd to say that this is the first time I’ve ever seen him outside his apartment. I met him through the writer Joe Westmoreland, a novelist and the author of one of my favorite books, Tramps Like Us, and whenever I would visit Joe at their apartment just south of Chelsea, Charlie would be there, totally preoccupied with video work that looked so ambitious I could barely make out what I was seeing. One time he showed us the music video he had just finished for Antony (of Antony and the Johnsons) and Boy George—a duet version of Antony’s song, “You are my Sister.” I don’t know if this video ever made it to MTV, for it seemed like each of the two divas looked totally preoccupied with, “Do I look as fat as him?”

Anyhow, when SF MOMA said they were having a show of New Humans and that Charlie Atlas was going to come in person I knew this was one event I couldn’t miss. What is the psychic equivalent of killing two birds with one stone? I called Joe and we met for dinner at the Samovar Tea House at Yerba Buena Center. Dodie who couldn’t go, warned me that the menu was so delicious that there would be nothing I’d like on it. This was true but we had a great time catching up, as Joe had not been back to SF since before the Museum was built—a good ten or twelve years ago. Other friends joined us, Hugh and Sandra, and I practiced my interview technique. “I’m going to ask Charlie some hard-hitting journalistic questions, “ bragged I. “Well, actually one. What did you want to be when you were a little boy?” Joe didn’t know what Charlie wanted to be when he was a little boy, but, he added, “I wanted to train seeing eye dogs.” “That’s weird,” I said. “I used to collect the labels off dog food cans and mail them into the seeing eye people, because if you sent in ten, they would send a dollar to the dog school.” Sandra said she wanted to be a song and dance girl, but that ambition was quashed. Hugh had many dreams. He wanted to be a girl; he wanted to be a junkie; he wanted to be a suicide; he wanted to come back as someone else.

When we got to the Museum, my eyes popped! The New Humans (Mika Tajima and Howie Chen) had transformed the Schwab Room into a giant installation. Tajima’s shed-like abstract sculptures stood like unfinished business, while a gleaming track wove around the floor like a question mark seen from above. 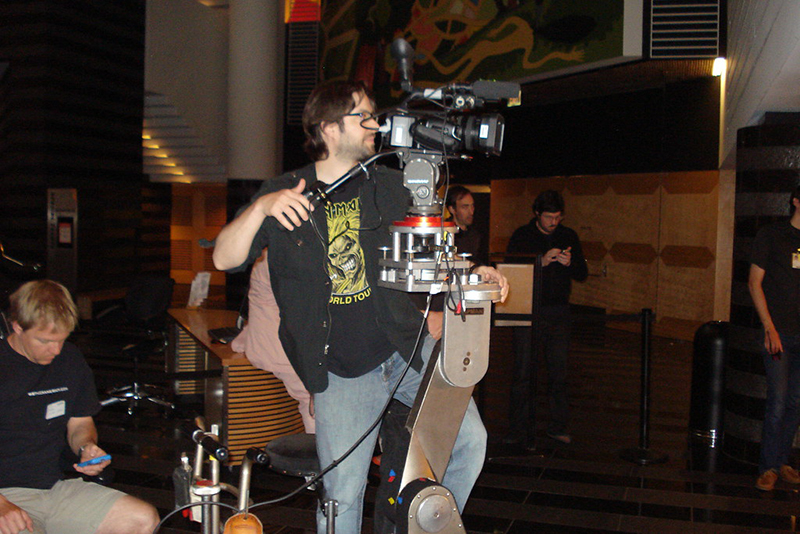 Look at the camera that this technician rides, providing complex in and out pans of the action to follow. How I wanted to jump the line and ride that tractor. I had to content myself with broad hints. The cinematographer, “Jared,” was friendly enough. Turns out when he was a boy he wanted to be an astronaut. In kindergarten they all lay down on the classroom floor on sheets of paper while adults drew their silhouettes, then the kids crayoned in the details of their futures — Jared drew space helmet, space suit, etc., but then he saw his best friend wanted to be an architect so he abandoned dreams of NASA and went on to something new. 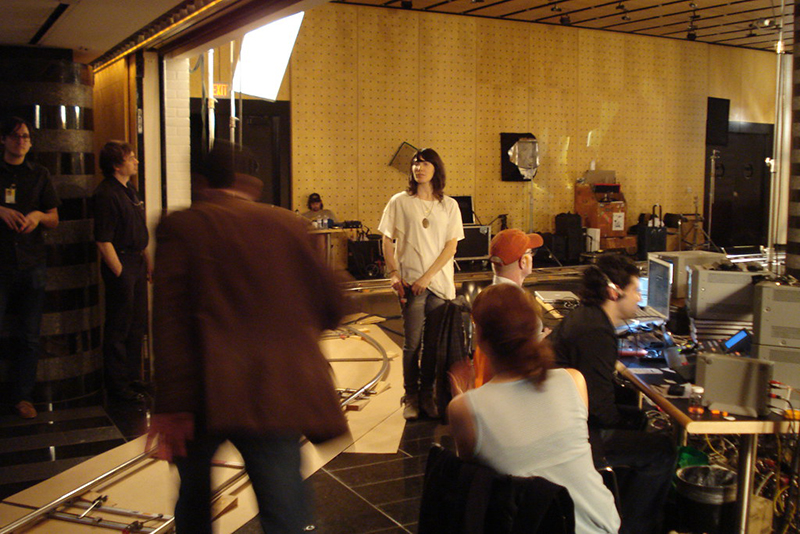 Can you see the tubular track laid along the floor of the Museum? It was awesome.

The music began — and Atlas at the center of an enormous bank of linked computers and monitors began massaging the visuals, as a DJ might create layers of sound. It was noise metal, with added special effects. He wore an engineers cap and canary yellow sideburns peeking out. Mika Tajima, the enigmatic genius at the center of the New Humans project, dropped to one knee in a blue dress and smashed four mirrors with a hammer. The sound of that shattering, instantly recorded, echoed, and looped, made for a deafening syncope. The sets were arranged so that no matter how close you came in, Mika and Howie seemed always obscured, oblique, maybe you’d see the heel of one, the elbow of another. 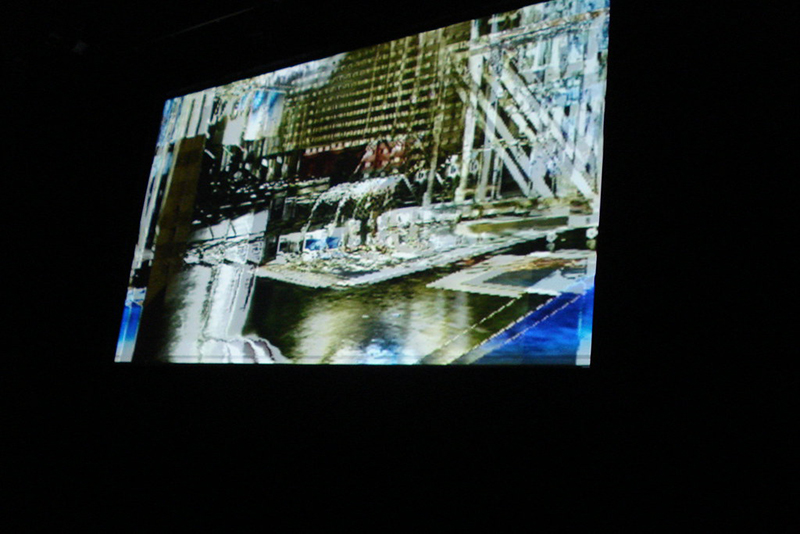 In the Phyllis Wattis room you could go, take a cushy seat, and see the whole event like a movie, as thousands of Atlas’s images, old and new, washed over the live performance like mist. 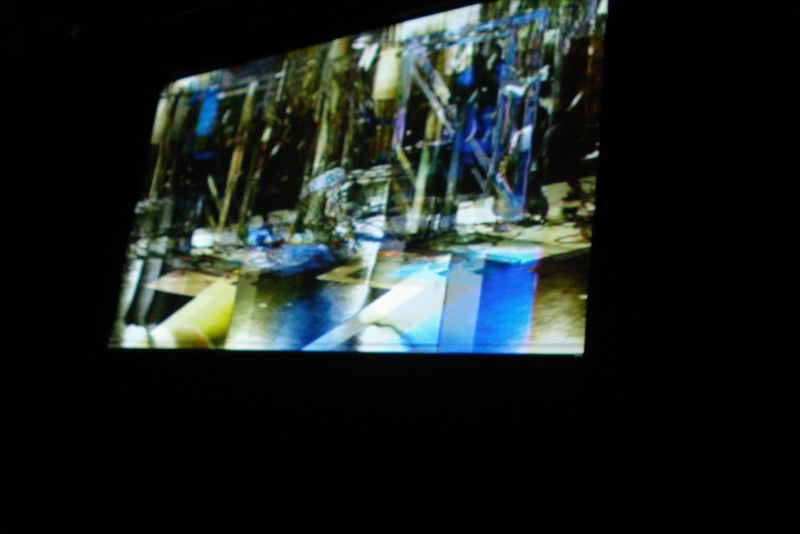 The juice was so fiery that, in the theater, the screen went black at what I thought a very appropriate moment but, when we streamed into the lobby, museum staff said the show was still going on, they had just blown a fuse. I thought half of San Francisco downtown must be implicated. I spoke to other art lovers like myself, many were baffled by the barrage of information, others turned on by it. For myself, it could have lasted another hour or more, I was geeking out. Nate Boyce wondered if the sonic component was perhaps not as gripping as the sculptural, video, and deconstructive aspects of the presentation (I forgot to mention that Mika spent some time wrenching planks from the positions in which they had earlier been nailed) (she is alluring when she does this, like Monica Vitti fighting crime in Modesty Blaise). 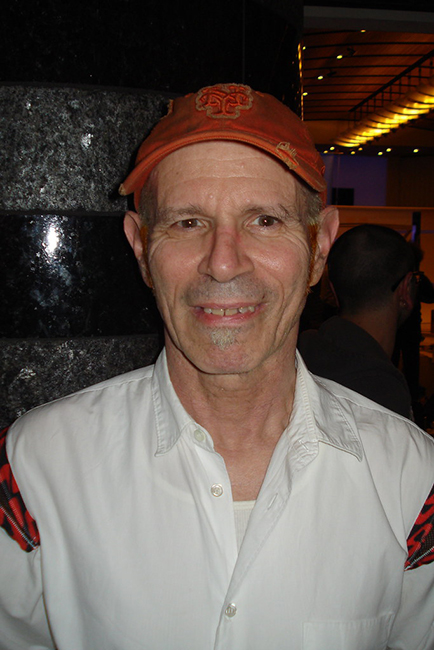 In the applause that followed I saw my chance. Charlie said that when he was a little boy, he wanted to be a fashion designer. Mika wanted to be an artist, but when she heard about Joe wanting to train seeing eye dogs, she cried out, “That’s the other thing I wanted to do — be a vet.” She signed my autograph book, explicating her fate. “I wanted to be a vet that would treat only dogs. Then I realized a veterinarian would have to take care of other animals too, so it was back to art for me.” 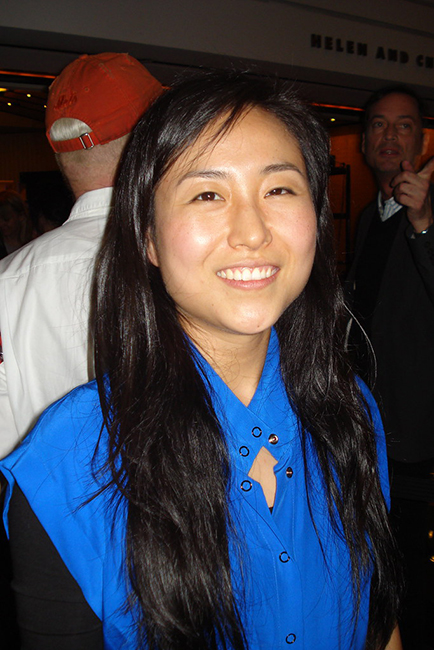 Mika Tajima (New Humans): maybe it’s not a dress at all but some sort of jumper?