Daddy always said that if one just stayed put in San Francisco, eventually everyone who mattered would show up here, and then he himself came as if to prove himself correct. I remember him tottering off the plane as though an earthquake was actually happening. And then he came back two other times, never entirely relaxing, but affable enough, like a mint julep. I thought of him tonight when John Giorno came to San Francisco and gave a jubilant reading for the Poetry Center at San Francisco State.

Even if you know nothing about poetry you will remember Giorno as the actor in one of Andy Warhol’s most notorious films, Sleep–Warhol’s first film, made when the artist was 35 years old and looking to try something new. Giorno was 27 and, it is said, Warhol’s boyfriend at the time. The film consists, as many know, of Giorno sound asleep for nearly five and a half hours-there’s a version in which some of the shot footage is repeated to make it last eight hours-an elaborate joke on contemporary health advice which urged Americans to sleep eight hours a day, nearly an impossibility for the always alert Warhol. Tonight John Giorno looks wiry, energetic himself, though I imagine he sleeps just as deeply now.

Maybe this is an illusion brought on by his heavy-lidded bedroom eyes, the left one of which rarely opens all the way up. All in all he is a performer of exquisite looks, a cap of soft white hair exquisitely combed in furrows up and over his ears towards the back of his head. High-tipped eyebrows of an imposing jet black contrast with this white, soft hair, like Mia Farrow with the eyebrows of Penelope Cruz. So yes, he always looks surprised, and yet his eyes have seen so much trouble and pain in the world that only a practice of Buddhism could have spared him. 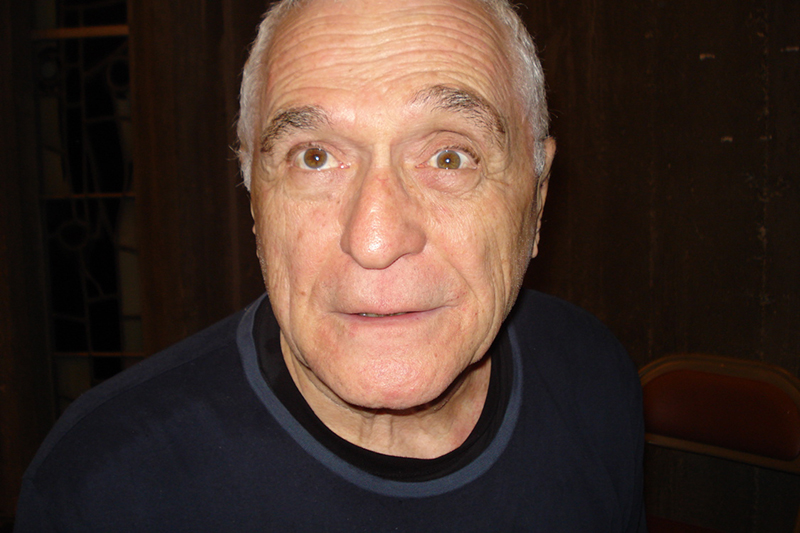 I met him once before, in New York, in the 1970s, outside the building on the Bowery where, he tells me, he still lives. “Were you looking for me or were you looking for William?” he teases, I guess he knew he had spotted a Burroughs fan! I was an undergraduate with a sort of boyfriend who lived way way downtown next to John Giorno. “Who?” I mumbled, but soon this guy had filled me in on everything Giorno had done.

He had pioneered the “Dial-a-Poem” service, where you picked up a phone–heavy old rotary phones then, most of them black–slid the little hole around a standard dial, like picking a safe–how slow and balletic it seems now, compared to the punching the numbers we’ve come to know (or now touching the screen, the ultimate in affordances). Anyhow a recorded voice would come on-did they change every day? If I remember right, some days were “live” days when Edwin Denby or Jim Carroll or Creeley or Muriel Rukeyser would be answering the phone themselves. Now when I want some of that same thrill I pick a day  I know Michael McClure will be out of town on a gig, and then I dial his home number and his answering machine has him reading one of his own, loveliest poems.

Giorno’s new book Subduing Demons in America is a greatest hits sort of affair that goes way back to the days of Sleep and then right up to the present day, so there’s tons of variety. Some of us will prefer the earliest poems, fantastic and innovative “found” materials collaged up and given a psychedelic, politicized edge from the simple power of juxtaposition. Ironic? Oh, terribly so, but always sincere too, and some of them with a Brechtian power of insult and shit-disturbing. Tonight, for the Poetry Center, he read poems from the past 10 years-well, not “read” because he performed them all from memory-once or twice going “up,” and at such moments his eyes would widen, both of them, and a grin would tighten the corners of his mouth, as if to say, “Wouldn’t you know it!” Having so little memory myself, I’m always astonished when poets can recite their own work, though nobody’s astounded when, say, a dope like John Mayer can remember his own insipid lyrics. I was sitting there nearly to stunned to snap a photo. 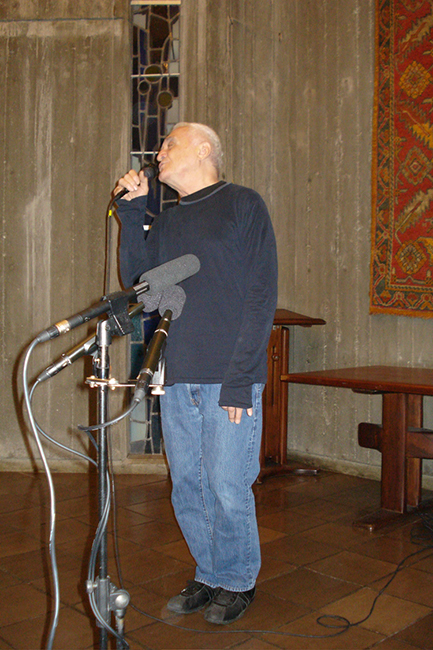 One piece described the death of Burroughs: “I was there when Burroughs died and it was one of the best times I ever had with him.” Much of what he recalled was about the outfit they dressed him up in to place in the coffin, which pants, which underwear, what exotic Berber accessories, which watch, what drugs to slip in his pocket. The .38 that Burroughs slept with, loaded, during his last 15 years of life. His ribbons from the American Academy of Arts and Letters. There were more things in the coffin than in Noah’s Ark! I have never buried anyone with anything, but from now on I think I will–mementoes–what have you. I will remember John Giorno bouncing on the balls of his feet like a kid, his left hand always in motion like Marcel Marceau, but with a boulevardier’s ease–like Jackie Gleason in the often-maligned Gigot. He is an institution of a very particular kind: when urging my students to attend this show, I stopped when one asked me if he was the French novelist who wrote The Horseman on the Roof. “No, that was Jean Giono,” I told Chris. “Different first name and different last name.” but this left me wondering if Warhol thought he was photographing the French novelist asleep. People say that Brigitte Bardot was Warhol’s first choice anyhow. I could write a whole book about Warhol’s French side, but Wayne Koestenbaum has probably done so already.  Cheers, Wayne! 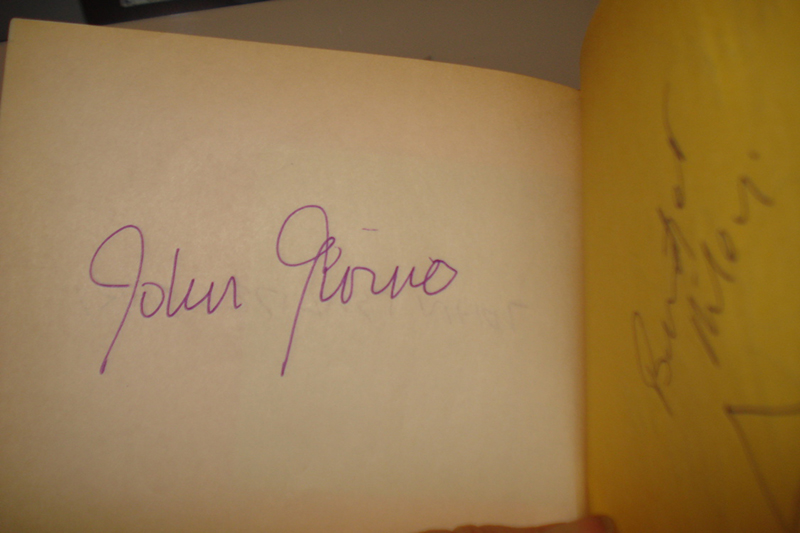