New York-based filmmaker Ramin Bahrani‘s third feature film, Goodbye Solo, opened this week in a limited Bay Area run. Ramin takes an approach to cinema that many people would call “low-budget,” but which I prefer to think of as economical: doing only what the story requires, no more and no less. He’s produced three feature films in five years, working outside of the Hollywood system. Goodbye Solo has been lauded by reviewers including The New York Times‘ A.O. Scott, who cited the film as exemplary of a refreshing new realist milieu.

Ramin’s approach to filmmaking resembles that of a novelist more than a director, in that he begins with real people whom he gets to know in depth as he fictionalizes their stories for the screen. Solo is based on a Senegalese taxi driver from Winston-Salem, North Carolina, that Ramin met and befriended some years back. He is played by an actor, Souleymane Sy Savane, who is an engaging and natural onscreen presence. Ramin generally uses non-professional actors, such as in his first film, Man Push Cart, in which the real subject of his story played a fictional character that resembled himself. 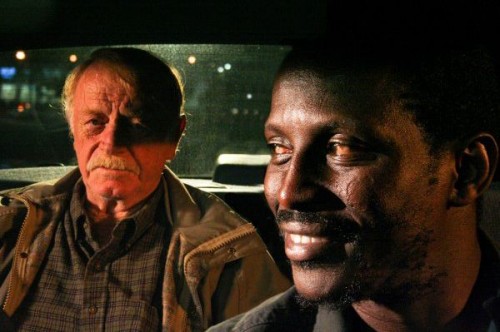 Ramin’s interest is in telling real, if not entirely true, stories. Blurring truth and fiction, he captures the emotional complexities of a range of working-class and immigrant experiences with a raw and poetic sensibility. Disappointment is par for the course in his films. This is in part because real life is so often disappointing, and also because commercial American cinema so rarely deviates from archetypes of success and affluence.

With a MoMA retrospective (nearly unheard of for such a young director), two Times write-ups in as many weeks last month and a Charlie Rose interview that airs this week, Ramin is poised to break big with Goodbye Solo. Nonetheless it was a lucky few who took the opportunity to meet and talk with him at this past weekend’s screenings. Landmark Theaters’ Clay Theater in San Francisco and Shattuck Theater in Berkeley are screening Goodbye Solo for another week or two. Film fans won’t want to miss this opportunity to support a genuine artist of the cinema.