One on One: Lisa Sutcliffe on Guy Tillim

Alongside our new curator “One on One” talks, we’re doing occasional ‘one on one’ blog posts, from curators, staff, and public, on a particular work or exhibition they’re interested in. Today’s post is from Lisa Sutcliffe, Assistant Curator of Photography. 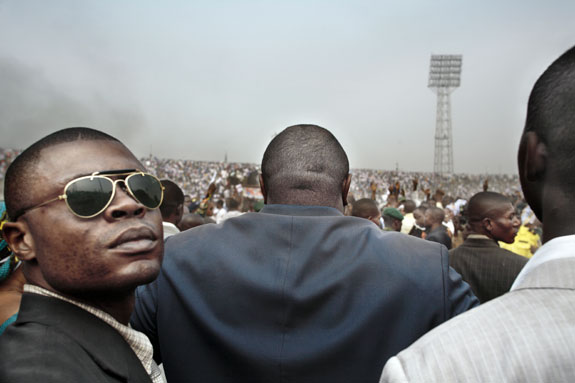 Please join me tomorrow evening at 6:30pm for a discussion of the work of Guy Tillim, a South-African photographer included in the current exhibition, Face of Our Time. Born in Johannesburg in 1962, Tillim has spent the last twenty years documenting the political, social and economic conditions of African nations as a photojournalist and freelance photographer.

In his recent series Congo Democratic, Tillim describes the political climate leading up to the historic 2006 elections in the capital city of Kinshasa. With a long history of political strife, including two successive civil wars that claimed an estimated 3.5 million lives and left the country in ruin, the Democratic Republic of Congo finally held multiparty elections in 2006. Tillim’s depiction of this momentous event diverges from the tradition of classic photojournalism: instead of capturing heroic images of leaders or dramatic instances of violence, he presents subtle details that serve as metaphors for the chaotic and charged political atmosphere. While shooting at a political rally that drew thousands of people into the streets,  for example, Tillim records the rapture of the crowd, and a quiet sense of anticipation. This picture of Jean-Pierre Bemba, one of two leading presidential candidates out of a group of thirty-three, emphasizes the hulking form of Bemba’s back as he enters the stadium and a menacing glance from one of the bodyguards who flank him. Tomorrow I hope to further discuss the development of Tillim’s personal documentary style, and its relation to the tradition of photojournalism.

Tags: Face of Our Time, Guy Tillim, Lisa Sutcliffe, lsutcliffe, One on One