One on One: John Zarobell on Sargent Johnson’s ‘Forever Free’

Alongside our new curator “One on One” talks, we’re doing regular ‘one on one’ blog posts, from curators, staff, and public, on a particular work or exhibition they’re interested in. Today’s post is from John Zarobell, Assistant Curator of Collections, Exhibitions, and Commissions. 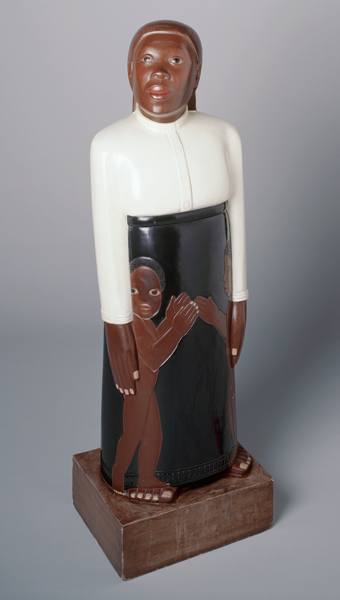 Sargent Johnson is not an artist you might find in a standard history of modern art, but his contribution to sculpture in the 20th century is unique and Johnson was one of the most prominent mid-century sculptors in the Bay Area. With the murals by Kerry James Marshall, which investigate the invisibility of African Americans in US history, now on view in the atrium it seems like a timely moment to consider the artistic contributions of Sargent Johnson.

Johnson migrated to California from Massachusetts in the 1920s and pursued his art education at the California School of the Arts (now the San Francisco Art Institute). During the WPA, Johnson worked in the studio of Benjamin Bufano, one of the pre-eminent sculptors of San Francisco, until he managed to receive some commissions himself, for George Washington High School in San Francisco and the Aquatic Park in Berkeley. The museum owns a number of works by Johnson but only one — Forever Free — is currently on view. Standing in the middle of a gallery of modernist art from the Americas, Forever Free stands out like a sore thumb, demonstrating a commitment to figurative art that I think has been overlooked in the attempt to make American art into a progression towards abstraction. I am particularly interested in the burden of representation that falls upon artists of color and I will be discussing this more in my one-on-one talk about this sculpture on April 30th.

Emerging at roughly the same time as many artists of the Harlem Renaissance, Johnson wrestled with many of the same issues but without the benefit of an established black artistic community. Instead, he thrived in the multicultural atmosphere of the Bay Area. He was concerned with the representation of African-American subjects and he once said: “I am producing a strictly Negro Art.”  His work harkens back to ancient polychrome sculpture of Egypt and Greece and color was one of his central artistic concerns. In an era in which most American artists turned at first to social issues and then to abstraction, Johnson consistently produced a figurative art that drew upon traditions but was decidedly modern in form. His use of low relief combined with stylized figures was but a single strategy of an artistic career that drew upon many sources but spoke repeatedly about the vitality of Black culture in America. As Johnson himself said, “The Negroes are a colorful race, they call for an art as colorful as they can be made.” I’ll consider what this quote might mean and discuss Johnson’s representation of an African-American mother on April 30th.

John’s gallery talk is Thursday at 6:30. Meet in the Atrium. And: Kerry James Marshall will be speaking here a bit later that eve, giving the Phyllis Wattis Distinguished Lecture. More info here.