The film series The Future of the Past, starting this Saturday, explores the rich cinematic history of imagining the future. Released from 1965 through the iconic Orwellian year 1984, the films present not-too-distant worlds that reflect extremes in the social, moral, and political trends of their time.

A few months ago Frank Smigiel, associate curator of Public Programs, and I discussed creating a film series loosely connected to Patterns of Speculation: J. Mayer H. Frank proposed a utopian theme, centered on 1970s films such as Logan’s Run. With that I was off and running…and compiling this list of titles was like a dream fulfilled! I remember many of these films from a childhood spent watching countless hours of television (unsupervised!), encountering these films first either as the late-night movie, on cable TV, or on VHS.  So it’s certainly a thrill for me to see them now on the big screen at SFMOMA. 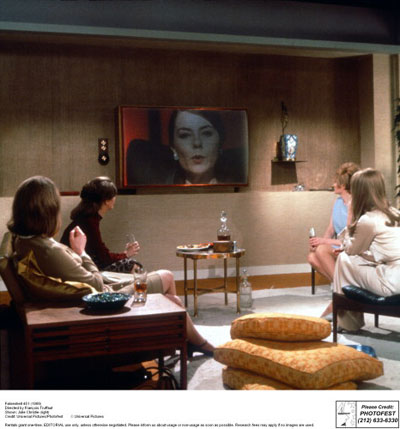 As the program began to take shape and I became more engaged with ways the plots, places, structures and characters of these films might serve my theme, the utopian fantasies soon revealed themselves to be just the opposite: dystopic realities. In these visions of possible futures, the systems ostensibly set in place to uphold pleasurable worlds of harmony and desire fulfilled are soon called into question. And as the systems break down, assumptions about their beneficial or well-intentioned functions also begin to break down: metaphorically, psychologically, socially, technologically. For example, in Westworld (which opens the series this afternoon) a completely manufactured world operates as a place for people to live out their innermost desires without consequence. At the $1000-a-day resort called “Delos” vacationers can safely immerse themselves in historical times and places — the Roman Empire, for example, or medieval England–and the resort is populated with androids programmed to react and respond appropriately to the whims and desires of the paying human visitors who, being far removed from their everyday social and moral restrictions, take advantage of an anything-goes mentality:  sex and murder without regret, moral conflict, or fear of punishment.  The “Westworld” of the film’s title  is the lawless American ‘old west’ visited by two pleasure seekers, played by Richard Benjamin and James Brolin, who give in to the allure of this supposed freedom and are seduced by saloon girls and get in to a shoot-out with the black-clad Gunslinger (played by Yul Brynner in a conscious nod to his character Chris in the Magnificent Seven). However, the technological system supporting the Delos resort begins to fail, and the androids get hostile, refusing sex and fighting back, and the promise of utopia without consequence is shattered in a technological meltdown.

And that’s just the series beginning! Shady totalitarian regimes wielding unchecked power; constant surveillance; thought control (love is a big no-no in these worlds!); and social conformity are the salient themes of 1984, Fahrenheit 451 and Alphaville. Logan’s Run investigates troubling solutions to overpopulation, while Soylent Green grapples with a global food shortage with a gruesome plan to resolve the crisis. A Clockwork Orange examines the role of behavior control through the eyes of a teenage criminal in a world without law. Woody Allen’s Sleeper adds comic relief to what is otherwise a series full of dire messages! And, the otherworldly Fantastic Planet, the only animation we’ve included, reveals life on both sides of the divide, suggesting that what may be utopia for one group, is dystopia for the other. 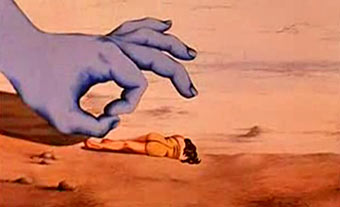 The Future of the Past series spans three decades of beautifully crafted works that portray the range of the human condition caught up in the paradox of moral, social and political extremes, played out in highly constructed terrain. The series could have gone on and on, too: for example, I would have loved to also include Shivers (dir: David Cronenberg, 1975), The Stepford Wives (dir: Bryan Forbes, 1975), La Vie est un Roman (dir: Alain Resnais, 1983), or Archigram and Superstudio films. Many of my colleagues here also had great suggestions for extending the series! and I encourage everyone to chime in with thoughts on films you would have liked to see so that perhaps the series can continue remotely…

Tags: Film, The Future of the Past