A bit of a gloomy tale from the Archives for a sunny fall day in San Francisco: 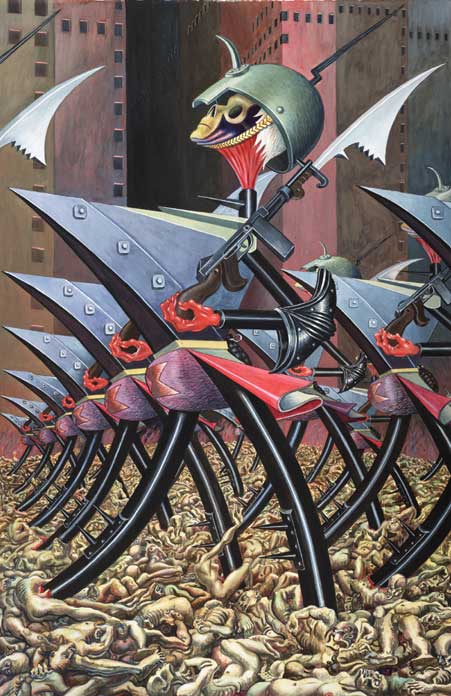 Painter Irving Norman‘s 1962 pleas to George Culler for a little validation and a one-man show (first ignored, then harshly denied) include a doleful reference to Allen Ginsberg‘s poem Howl.  Not coincidentally, for this blog post anyway, today marks the anniversary of Ginsberg’s legendary first reading of the poem, at the Six Gallery on Fillmore street in San Francisco in 1955.  Of some not-really connected interest is that the work of both artist and poet was at once time censored for obscenity: a painting of Norman’s taken down by the de Young in 1950, and the same charge leveled almost immediately against Howl. The letter below makes clear that Norman didn’t think much of Ginsberg’s famous poem at the outset, however Norman’s difficulties in getting his work recognized by the museum and then-director Culler apparently helped him tap into his rage and alienation, and gave him reason to reconsider the poem. Read on, but get the Kleenex out.

Norman grew up in the middle of famine-struck Poland during World War I, emigrated to the United States, then joined the Abraham Lincoln Brigade to fight in the Spanish Civil War. Apparently these happy experiences had a lasting effect. He started taking art classes at the California School of Fine Arts (now the San Francisco Art Institute) in 1940 and had a one-man show at our museum in 1942, resulting in a favorable review by Chronicle art critic Alfred Frankenstein.

Fast forward twenty years: Norman writes to director Culler asking for a new one-man show and some constructive criticism of his recent work. Ignored twice and thoroughly discouraged by his lack of success, Norman makes a final plea in 1963, relaying a sad story about nibbling mice.

Disregard the unusual use of punctuation, and the underlying story is a perhaps sadly familiar artist’s tale. (Transcription, and the rest of the exchange, below.) 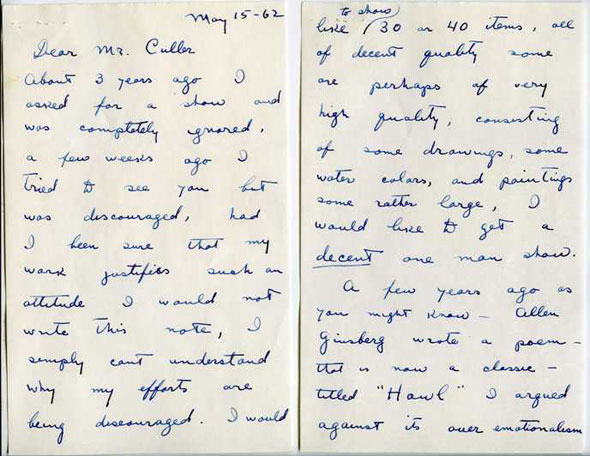 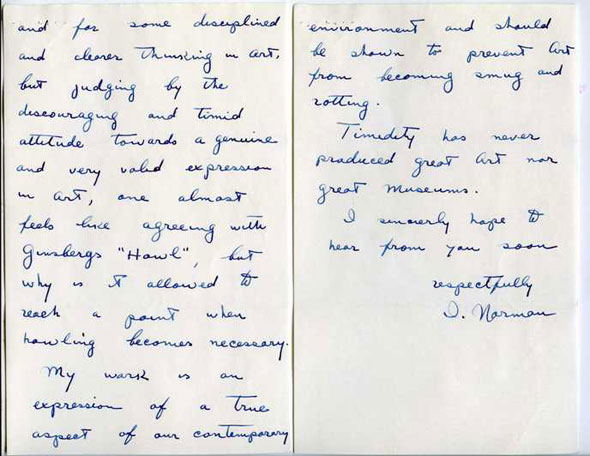 May 15 – 62
Dear Mr. Culler
About 3 years ago I asked for a show and was completely ignored, a few weeks ago I tried to see you but was discouraged, had I been sure that my work justifies such an attitude I would not write this note, I simply can’t understand why my efforts are being discouraged. I would like to show 30 or 40 items, all of decent quality some are perhaps of very high quality, consisting of some drawings, some water colors, and paintings some rather large, I would like to get a decent one man show.
A few years ago as you might know – Allen Ginsberg wrote a poem – that is now a classic – titled “Howl” I argued against its over emotionalism and for some disciplined and clearer thinking in art, but judging by the discouraging and timid attitude towards a genuine and very valid expression in art, one almost feels like agreeing with Ginsbergs “Howl”, but why is it allowed to reach a point when howling becomes necessary.
My work is an expression of a true aspect of our contemporary environment and should be shown to prevent Art from becoming smug and rotting.
Timidity has never produced great Art nor great Museums.
I sincerely hope to hear from you soon.
Respectfully
I. Norman

Feb. 6 – 63
Dear Mr. Culler,
23 years ago I left the world of politics in contempt for its trickery brutality and illusions, and by natural inclination drifted into the world of art.
Under the influence of the writings of Thomas Wolf, especially his “You cant [sic] go home again” I thought I found in the world of art the possibility of a broad and deep understanding of human existence which is above all a search and a facing of Truth.
Is it possible then that the world of art is similar to the world of politics, for how else can I understand the neglect of my work. If I could only know for sure the real reasons for it, I can only speculate. The left can never forgive my leaving them, and the right thinks this the best of all possible worlds. If the reasons for the neglect of my efforts are due to brutal political intrigue, then I have good news for those who practice it. I recently found mice nibbling at my pictures in my storage shack where most of 23 years work is stored and perhaps rotting.
I wish I could know the results of your study of my work. You may of course keep the photographs as long as you need, but will you kindly return them when you are ready they are the only ones I have
Respectfully
I. Norman

And then finally, a response from Mr. Culler:

I am sorry to have kept your photographs so long. They are being returned to you now.

I have a great deal of sympathy with your situation and with the message you have tried to convey in your work. I can assure you that no political considerations are involved when I say that we are not able to offer you an exhibition.

We are concerned with artistic quality. Our judgment must operate to select the works we believe to be of the greatest artistic significance, a term which does not exclude the nature of the artist’s intent but also takes very much into account the success the artist has had in realizing his goals through visual means. I say this only because I want you to realize than an adverse decision about your work down not mean that you are being excluded for political reasons but only that, while it has value as art, this value in our view is not superior to other work being considered. I am sorry that I cannot be more encouraging.

We’re with you in Rockland, Irving! Although you’re pretty unpopular in the art press. The story isn’t all sorrow, however: despite the desperate tone of the letters, Norman didn’t give up his mission –  there are two paintings in our own collection and two posthumous retrospective exhibitions (The Measure of All Things at de Young in 1996, and Dark Metropolis at the Crocker Museum in 2007), celebrated his work. Interestingly, during the Crocker retrospective, that museum was also simultaneously exhibiting a group of photos by none other than, oui, Allen Ginsberg.