Anyone seen a bison head lying around?

The Archivists at the SFMOMA Archives work to organize and preserve the records of the museum’s history, sorting through press clippings, scrapbooks, and letters to find the ideas behind past exhibitions, activites, and events. We’ll occasionally treat you to some of our more illustrious findings.

It was a tense moment in the comment box last week, but the SFMOMA blog seems to have weathered the storm. Do let us say that the museum is no stranger to criticism. There is, lingering temptingly in the archives, a story too good to keep to ourselves: the infamous mystery of the “missing” artwork donated in 1972 by the Bay Area Dadaists.

In an attempt to upstage a donation by Harry W. and Mary Margaret Anderson of paintings by Robert Rauschenberg and Jasper Johns, the Bay Area Dadaists gave the Museum an “even more lavish gift,” in the form of “Bertha Buffalo” – a bison head with a Dada treatise in its mouth. When Director Gerald Nordland didn’t properly acknowledge the gift, the Bay Area Dadaists sent him this threatening letter: 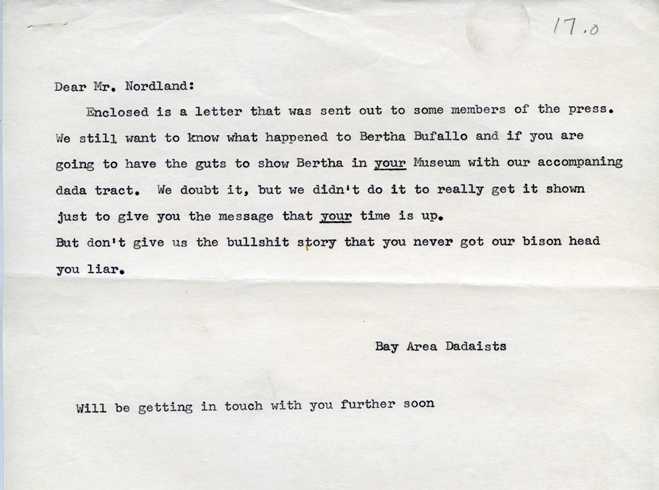 Along with the letter, the Bay Area Dadaists also sent:

One: A copy of a recent article about the Anderson donation (which apparently left them “Rauschenbergless”). 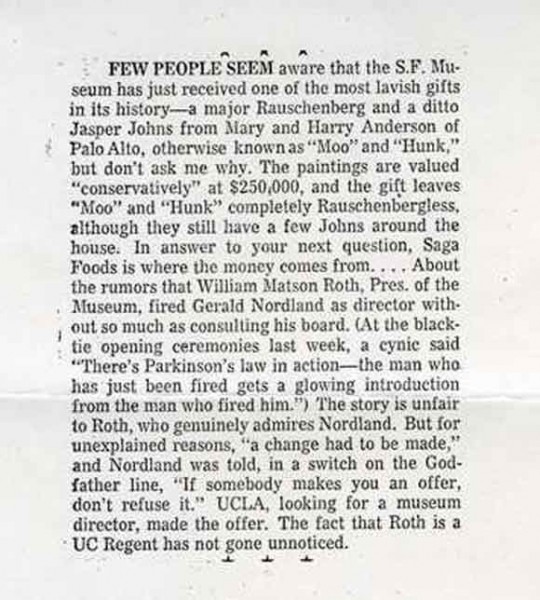 Two: A letter sent to members of the press (complete with creative spelling) exposing the atrocious actions of the museum… 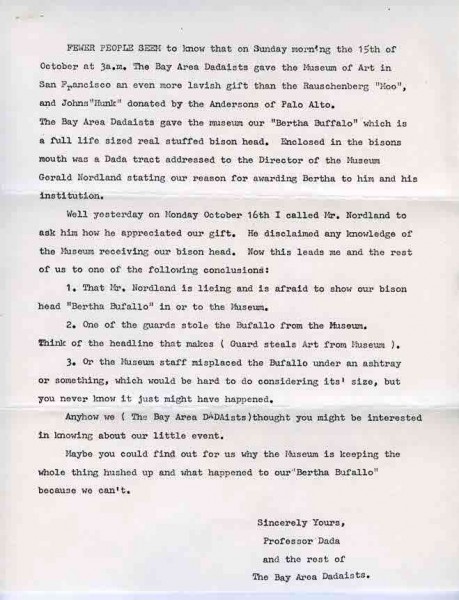 1. That Mr. Nordland is lieing and is afraid to show our bison head “Bertha Bufallo” in or to the Museum.

2. One of the guards stole the Bufallo from the Museum. Think of the headline that makes (Guard steals Art from Museum).

3. Or the Museum staff misplaced the Bufallo under an ashtray or something, which would be hard to do considering its’ size, but you never know it just might have happened.

And, three: They also included their original statement, describing the Bertha Buffalo gift: 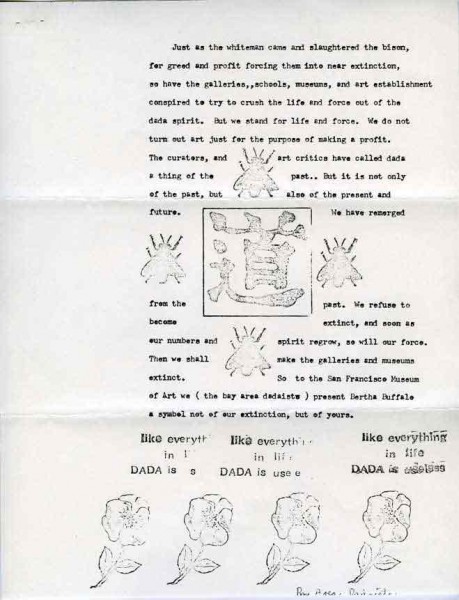 “Just as the whiteman came and slaughtered the bison, for greed and profit forcing them into near extinction, so have the galleries, schools, museums, and art establishment conspired to try to crush the life and force out of the dada spirit. So to the San Francisco Museum of Art we (the bay area dadaists) present Bertha Buffalo a symbol not of our extinction, but of yours.”