About the Eternities Between the Many and the Few 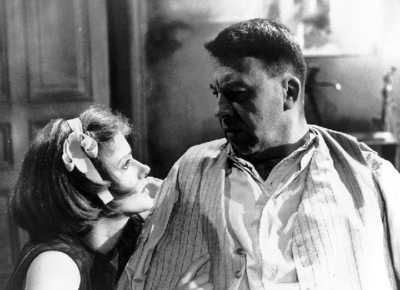 Hi readers! It’s Brandon, just here in small print to say how happy I am that this conversation has continued here on the blog! If it is the Mount Everest of modern cinema, then I think we’re seeing some clouds breaking at the top. Which is exciting, and terrifying! See you in the comment box!

Brandon: We made it through another thrilling four episodes of Berlin Alexanderplatz!

One thing I noticed about our discussion last week and going into this week is an increased awareness of and interest in both Fassbinder’s direction and cinematography and the acting performances in the film. We’ve now seen twelve hours of this film, more or less, and while the narrative continues with varying degrees of continuity and diversion, I am interested in the posts and comments about Berlin Alexanderplatz as a material production, from the terrific insights of Brecht to comments about the soundtrack and camerawork.

I say this despite the fact that by the end of the episodes screened last night, the focus couldn’t be on anything but the drastic violence depicted in the final episode. These four episodes center on the introduction of Mieze. This introduction is accompanied by the repeated flashback to Franz’s murder of Ida, each time from a slightly different angle. This repetition with difference has the effect of insisting the elements of the scene and preserving the sheer brutality of which Franz is capable. When the crisis happens with Mieze, her screams are both referential (they evoke Ida’s scream) and utterly unique.

But I don’t want to make this whole post about the ending, shocking and impressive as it was. I was interested in so many different things in these four episodes.I loved dwelling on Franz’s laughter through much of these episodes. In the first screened episode, Franz reads the story of a couple who murder their children—and laughs hysterically while giving the account. This laughter later manifests as glee, and I am now thinking of the amazing scene with Willy and the man from the political rally.After leaving the men’s room (a place we’re often at with Franz and other men), Franz claims that “he doesn’t like political discussions”, after which he delivers a near monologue on politics and work. Repeatedly he claims that he does “nothing for work”, all the while he and Willy play on a teeter-totter and swing set, inexplicably located in the dingiest of all dingy, broken down basements!

Dominic: Berlin Alexanderplatzploitation? That was a disturbing evening. I was speechless afterwards. Let me try and at least ask a question. So last night’s program (episodes 8-11) centers on Franz’s relationship with Mieze. It starts out joyous. Episode 8 is even a little cutesy in parts, except for the repeated flashbacks to the killing of Ida. Then the violence of that killing is visited on Mieze. Here’s the main thing I don’t understand: whether against Ida or Mieze, it is jealousy that motivates Franz’s violence. This is clear in the book too (see pages 270-277). But we talk about Franz as if he’s a character without substance, a kind of animal who’s pulled this way and that by outside forces. (The moment he’s just done beating Mieze, he becomes anonymous: ‘…Franz Biberkopf — Peeperkopf, Sleeperkopf, he’s got no name — the room’s turing round… Franz Biberkopf, Heebiekopf, Jeebiekopf, Sleepykopf… page 275.) So how is he capable of jealousy? One other question: how does Mieze understand her bond with Franz. He always says he loves her, but she always says only that she belongs to him, even if she loves another. What does that mean?

Suzanne: It was a brutal evening. But not unfun. For point of entry, I’ll try to address Dominic’s questions—

First, I don’t think Franz is capable of jealousy, is it that jealousy is a subtler emotion? One that requires imagination? One that’s complicated by eroticism? (Franz’s desires are (only) base–remember the scene w/ the ‘benefactor’, who says the most beautiful movements a woman makes are when she is dressing; for Franz it’s unfathomable that the woman putting her clothes ON could be pleasure) But Franz is capable of, or buffeted by, pain and rage (primal emotion). When Mieze explains the benefactor’s rented an apartment for her, Franz sinks to his knees and starts wailing and biting the armchair, pure grief, pure despair. It’s not jealousy. (Mieze mirrors Franz, when she thinks he’s leaving her, same story, grief and wailing) But something different happens when Reinhold is there as voyeur: Franz wants to prove Mieze’s goodness, but she confesses she’s fallen in love. In front of Reinhold, Franz is— humiliated? Then he’s experiencing shame AND grief at the loss of the beloved Mieze (but he hasn’t lost her), —my final, clumsy, counterpoint/suggestion: we agreed last night two things about Ida’s murder: 1] she is about to leave Franz for a ‘client’ and 2] she is ridiculing him—ie, intolerable pain of loss plus humiliation—not jealousy—equals rage & brutality?

As to love/belonging, Mieze says several times that she loves Franz; to Eva, & at least once to Franz directly: “I love you. I think I will always love you. I will never leave you, never.” For me, a moving expression of how Mieze loves /understands their relation, is what she says just before Franz begins to beat her: “I told him (the boy/the nephew) that it could never be, I belong to you, and now YOU SHOULD CONSOLE ME” (since I can’t be with this boy I love, as I belong to you). Of course that’s exactly what Franz should do—Franz & Mieze belong to each other, to have fallen in love with a boy that afternoon is NOTHING compared to the belonging to (she couldn’t belong to without first having loved). The boy could never console her for the loss of having belonged to Franz, but Franz and Mieze could love each other more/belong better by having shared a kind of mutual suffering (her infidelity & loss), which we soon hear Mieze calling ‘a secret’: now the shame & violence of the beating. It is true though that, after Franz has beaten her so terribly, and asks Mieze, do you still love me, she answers only, “I belong to you.’